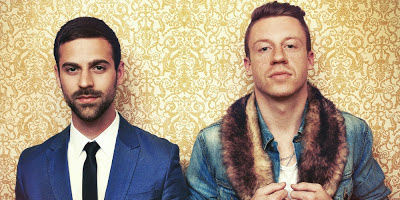 Each week I look at the Irish singles charts to see if there is any song that stands out from other international charts. Over it's history many songs have sometimes done better in Ireland than other countries. One song that stood out on this week's Irish singles chart is Same Love by Macklemore & Ryan Lewis which is at number 97 but it is still a song that has been downloaded here in Ireland as a separate song from their The Heist album and that is important. It was a number one song in Australia last year and got to number 89 on the Billboard Hot 100 singles chart.
I would call Same Love an ally song as it is about LGBT equal rights and questions religion, language, hip hop and other things in relation to LGBT rights. This week it just made me think how many people in Ireland both LGBT and straight have connected with this song by two international number one best selling music artists.

By now in 2013 we are well used to female pop stars such as Madonna, Lady Gaga, Katy Perry, Cyndi Lauper and P!nk all standing side by side on the issue of equal rights. Out male stars like Holly Johnson, Boy George, George Michael and Andy Bell do this on a daily basis through social media but we don't always hear positive LGBT themed songs or messages by other male stars and bands. There are of course many straight male allies but I do think some of today's singers and stars are gay themselves but go just so far by saying they support equal rights and remain in the closet which for me is irony. Same Love is written from a personal perspective, Macklemore's own sexuality is mapped out early in the song but I love how his uncle was a positive influence on him and how he has become part of the song's story. The verse lyrics are sung by Macklemore but the chorus is sung by Mary Lambert and in doing so the lyrics also acknowledge same sex love between women and that is equally as important.

Here is the music video directed by Ryan Lewis and Jon Jon Augustavo which features many positive images. It has been viewed over 22 million times since October 2012.

Posted by Unknown at 2:28 AM No comments: