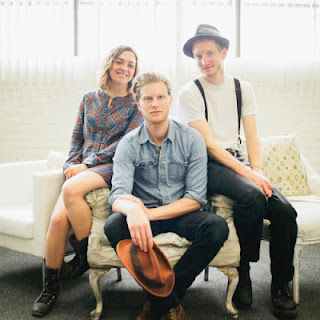 Ho Hey is a very sweet song by The Lumineers. It charted this week at number 90 on the Billboard Hot 100 singles chart. The Lumineers are Wesley Schultz, Heremaiah Fraites and Neyla Pekarek and they come from Denver, Colardo. Fellow music blogger John from Pop Music Notes is from that part of the world so I thought of him when I heard this song.

The folk country genre often has many songs that sound the same but I think this one is kinda special.  It's one I could definitely see doing well here in Ireland so I think it will be one to watch.

The Bird and The Bee are Inara George and Greg Kurstin. I think it was through Yuri writing about them on his music blog Olga Loves Yuri that I first heard about them when he loved their album Interpreting the Masters Vol 1: A Tribute to Daryl Hall & John Oates. That album was released in 2010 and it featured their versions of 8 songs made famous by Hall & Oates and also one of their own original songs.

Hall & Oates were one of those pop acts that made me wish I was a teenager living and growing up in America in the 1980s. This week I started listening to The Bird and The Bee's Hall & Oates covers again including Private Eyes and One on One and Kiss On My List is the song that I seem to like the most at the moment. The wonderful line 'when they insist on knowing my bliss' has stood out in my mind since I first heard it over 30 years ago.

The Bird and The Bee have also covered other pop songs so I may post another song one by them on this list.

For now here is their cover of Kiss On My List.