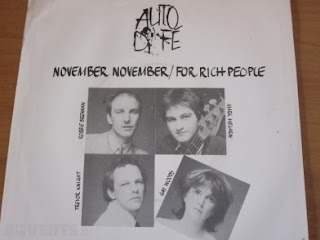 
The first song is November November by Auto De Fe which was released in 1982. 30 years ago! I can still remember hearing it on the radio. The beautiful vocalist on the song was Gay Woods who is pictured on the single cover above. November November always reminded me of a song that Barbra Dickson or Maggie Reilly could also have sang but I loved knowing it had an Irish connection. The band were formed in Holland but have always had irish connections.