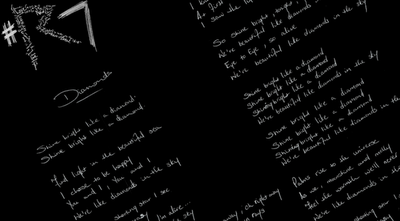 Rihanna's new song Diamonds received it's first radio play today. The lyrics were written by Sia and you can really hear her influence in the song. It is the first single release from her as yet untitled seventh studio album and there will be a Diamonds world tour starting in 2013. Her North American tour begins in Buffalo on March 8th next year. More details here.

Diamonds is a great big anthem of a pop song and one that I think is instantly likeable. I hate the single cover so instead there are lyrics above.