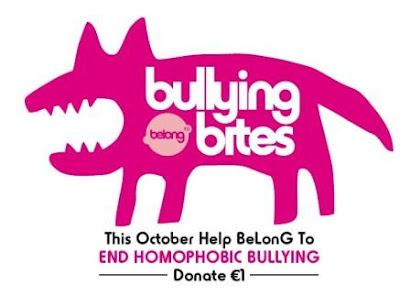 Over the past ten years the LGBT youth group and organisation BelonG To has become well known here in  Dublin and around Ireland. Through high profile media campaigns highlighting issues that effect young people in Ireland they have also come to the attention of LGBT groups around the world. BelonG To really is one of the most important groups in this country because of the many people who have received help, support and made friends through it.

They have campaigned about the issue of Homophobic bullying in schools and other places which many LGBT people know goes well past our school years.

To date the following restaurants have become involved:

If you would like to learn more about BelonG To and the work that they do or if you are an LGBT young person and would like to find out about their youth groups their website is BelongTo.org and their Twitter page is @Belong_To

Here is a video that was made for BelonG To's on line media campaign which is called Stand Up! Don't Stand for Homophobic Bullying. It was first screened in April 2011 and has since then received over one million views on line. the video was written and directed by Anna Rodgers and Aoife Kelleher and was produced by Zlata Filipovic. The production company was Crossing the Line Films.