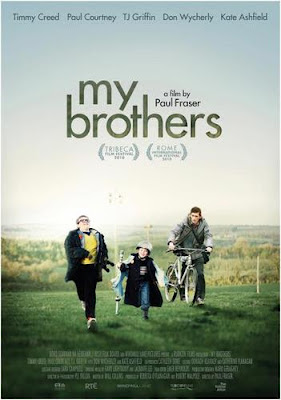 My Brothers is directed by Paul Fraser and is released in selected Irish cinemas on August 17th. My Brothers is set over Halloween weekend in Ireland in 1987. It tells the story of three brothers; Noel, Paudie and Scwally who set out on a road trip to replace a watch for their dying father. Along the way, in the great tradition of road movies, the three brothers meet various characters and they both bond and fight.

It is the first feature length film directed by Paul Fraser who has previously written the screenplays for acclaimed films such as Somers Town and A Room for Romeo Brass. He was also writer on Heartlands, a film from 2002 which was directed by Damian O'Donnell and was one that I remember really liking a lot when it was in the cinema. It starred Michael Sheen and Celia Imrie.

My Brothers will screen at the Screen on D'Olier St, the Lighthouse Cinema and at Movies @Dundrum which are all in Dublin and will also screen at the Gate and the Triskel in Cork. Hopefully it will be shown in other cinemas too. The soundtrack also features original music by Jacknife Lee and Gary Lightbody of Snow Patrol.