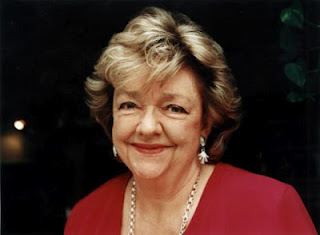 If you live in Dublin or outside of our capital city you will be aware that there is a new bridge being built at the moment that will connect the LUAS railway system. It will make the city centre even more assessable than it is at the moment. A few months ago several people noted through websites and other social media that there were very few statues or bridges named after well known Irish women in Dublin. Panti wrote about that fact on her blog here back in June of this year and has also wrote about the story since.
Over the past week or two there have been suggestions that the new bridge in Dublin's city centre should be named after the great Irish writer Maeve Binchy who died at the end of July. I know many people will think this is a really great idea and would be a great tribute and lasting mark of respect for her.


More and more nowadays in Dublin and around the country people don't just say they should do something, instead they go and do it. I was delighted to see that a blog, Facebook page and on line petition has been set up to collect signatures to send to the department of Transport to consider naming the bridge after Maeve.

If you would like to do so the link to the petition is here.

Their Twitter page is @MBinchyBridge for updates on the progress of the petition.
Posted by Unknown at 8:16 AM