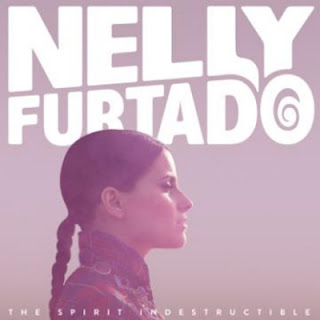 Nelly Furtado has released the official new music video for her new single Spirit Indestructible. I much prefer this song to her previous single Big Hoops (Bigger the Better) which was a UK top 20 singles chart hit recently. It is the second single released from her forthcoming album The Spirit Indestructible whose cover art is pictured above.


The official music video for Spirit Indestructible is beautiful but it is also very different to the song's previous  lyric video which used the theme of the song in a very inspiring way with footage of Nelly's friend Spencer West's climb of Mount Kilimanjaro which he had participated in to raise awareness and financial support for clean water projects in Africa.
Almost all major music artists use lyric videos to promote a song before the official video is released and most are exactly that; just lyrics on a screen but the Spirit Indestructible lyric video had stood out for using visuals that were genuinely about the greatness of the human spirit and one individual so I guess fans were expecting a mix of that lyric video with or without Nelly in the official video. I think lyric videos become our first impression in a visual way of a song nowadays so if I choose a video I liked more I would choose the one with Spencer as it completely sums up the message of the song. On Nelly's Youtube page she writes about the song and video and Spencer is also quoted talking about the song so click here to read his own words too.

Here are both videos. The first is the lyric video for Spirit Indestructible.

and here is the official video.