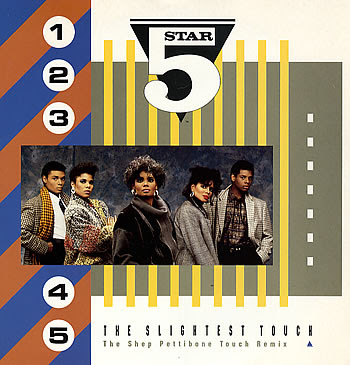 In 1987 The Slightest Touch was one of Five Star's biggest hits when it reached number 4 in the UK singles charts. It was one of seven singles that were released from their Silk and Steel album. The single edit and 12" were remixed by Shep Pettibone who also famously remixed many songs by the greatest music artists of the 1980s including several of Madonna's greatest singles in the mid to late 1980s. He also remixed several singles for Five Star including Rain or Shine, If I Say Yes, Find The Time and Somewhere Somebody.

His remix of The Slightest Touch made a great pop song into a brilliant dance song.

Any time you post Five Star, I am on board! Love this mix. I don't think "Slightest Touch" was released as a single here in the US. LOVED Silk and Steel, but Luxury of Life will always be my favorite. Sadly, the highest they ever got on the US pop chart was #41 with "Can't Wait Another Minute," although they got into the R&B top 10 three times.

Have you ever heard the Shine album? I was surprised that it never saw a release outside of the US, but there are some really great songs on there. "The Love You Bring to Me" and "The Start of Forever" are my favorites, along with the title track.

Thanks v much for the comment John, I am going to post a few more posts on Five Star, I have most of the songs on vinyl single and the first albums as well, I haven't got the Shine album so I will check that out too.