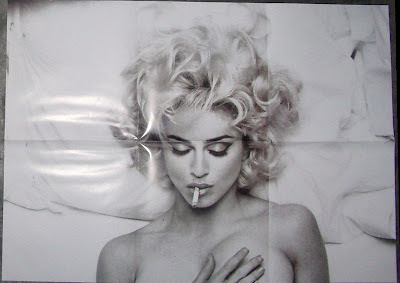 This coming Tuesday I will see Madonna in concert for the second time in my life when she plays the Aviva stadium here in Dublin. It is a huge venue and the atmosphere should be great. I am going to see her with my sister Jane and her boyfriend. This summer I will have been to concerts with both my sisters so that is very special.


One of my favourite songs by Madonna is Bad Girl from her 1992 Erotica album. It was written  and produced by Madonna and Shep Pettibone. In 1993 it got to number 10 in the UK singles charts and was a top 3 hit in Italy. The video is also one of my favourites too. It was directed by David Fincher who had also directed the videos for Express Yourself, Vogue, Oh Father. They really are four of the most iconic videos of her career.

The photograph above is by Steven Meisel and was the poster that was included with the 12" disc of Bad Girl.

To date Madonna has only sung Bad Girl live once. It was on Saturday Night Live. I had never seen this performance until today so as ever thank you to the person who posted it on Youtube. What is great about Saturday Night Live is that the guests sing live. the performance is so simple, just her and her band and a black background. Just Madonna singing a ballad.

Here also is the video for Bad Girl.