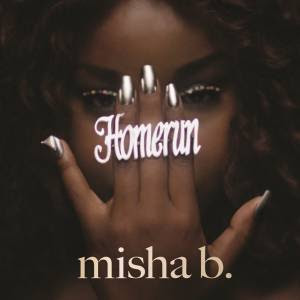 The new single releases in the UK go on release from Midnight every Sunday. Some of the more high profile single releases reach the top ten in just a few hours but it always interesting to see how newer songs with less of a sales history do in the charts. The only new single of all the new single releases that seems will be a certain hit in next Sunday's charts is Home Run the debut solo single by Misha B. As I write it is currently in the top 25 in the ITunes singles chart and climbing quickly. It was co-written by Misha B and MNEK who recently produced songs for The Saturdays and The Wanted and has remixed songs for Olly Myrs, Fazer from NDubz, Tinie Tempah and Simon Curtis.


Misha B was often both the most praised and criticised contestant when she was on The X Factor. She really showed then on the show that she has the attitude and belief in herself to overcome negativity and it was always obvious that her sound and look was one that most suited what younger music fans are actually buying and listening to today. Interestingly Home Run is also only 59p on the ITunes chart compared to an average of 99p for most other singles on the chart.

Even though Home Run is her debut single she already has nine videos on Vevo which include remixes and the making of the video.

Here also is the Kat Krazy remix of Home Run.