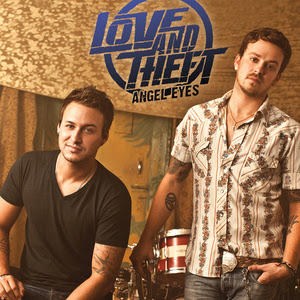 Angel Eyes by American country music duo Love and Theft is currently at number 55 on the Billboard Hot 100 singles chart. It is also number 9 on the American country music chart. Love and Theft are Stephen Barker Liles and Eric Gunderson. Their only previous Billboard Hot 100 hit was Runaway which got to number 65 in 2009. Runaway was also a number 10 hit on the country music chart and their biggest hit to date on that chart was Dancing in Circles which got to number 7. Both of those songs were from their debut album World Wide Open.

Love and Theft were originally a three piece band until Brian Bandas left the band. Angel Eyes is the first single from their second album which is the self titled Love and Theft. Just like the rap and hip hop genre of music that feature in the current American chart a lot of country songs all sound pretty much the same but Angel Eyes I think is pretty good. I guess it's all a matter of taste and what ever song clicks with you.

Here's the video for Angel Eyes.