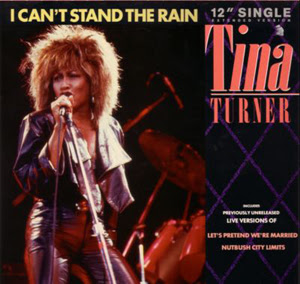 I Can't Stand the Rain was first recorded by Ann Peebles and released in 1973. It has been covered many times including the famous and wonderful disco version by Eruption which was a top ten hit in many countries including Ireland and the UK.


I love Eruption's version of I Can't Stand The Rain but a version that is just as fine is Tina Turner's cover which was one of the singles released from her Private Dancer album. It wasn't a hit in the UK and America but went top ten in the German and Austrian singles chart and was a number 2 hit in the French singles chart in 1985.

Private Dancer was an album that perfectly blended the genres of pop and rock. The remixes of the singles were fantastic. I will post some of them in another post including Better Be Good To Me which is amazing.

Tina Turner is without a doubt one of the all time best live in concert performers in music history. Here is the extended remix of I Can't Stand The Rain.