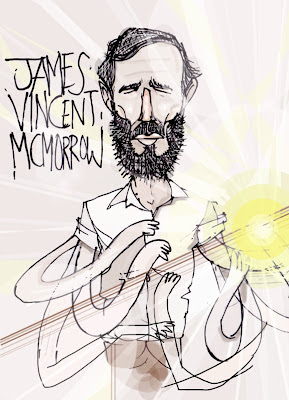 James Vincent McMorrow's cover version of Higher Love charted twice in the UK singles chart earlier this year and brought his music to an even wider audience. To date he has just recorded one studio album which is called Early in the Morning. He has also recorded two EPs, one of which was just for the U.S. He is currently touring and future dates later this month include the Galway Arts Festival on July 26th and the Cambridge Folk Festival on July 27th.

He has played in concert in many countries including the United States and Canada. Here is a cover of Wicked Game by Chris Isaak which he recorded at the Pabst Theatre in Milwaukee for a radio show in September of 2011. That cover also features on a re-released edition of his Early in the Morning album. Until today I never knew that Wicked Game wasn't a hit for Chris Isaak until it featured on the soundtrack for the David Lynch film Wild at Heart.

The drawing of James Vincent above is by my brother Mick Minogue who recently worked with him when he made a plush doll of James and was given to an audience member at James Vincent's concert at the Forbidden Fruit music festival here in Dublin earlier this summer. The whole story of that project can be read here.