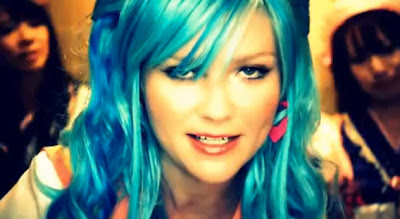 As part of a 2009 Tate Modern art exhibition called Pop Life: Art in a  Material World the Japanese popular culture artist Takashi Murakami collaborated with the film director McG and filmed a music video set in the Akihabara shopping district of Tokyo. The video which was titled Akihabara Majokko Princess featured Kirsten Dunst singing a version of the song Turning Japanese which was a hit in 1980 by The Vapors. The project was a commentary on Japanese popular culture and how the world in general views it. The video has received a lot of mixed reactions which often states that as a project it works. The lyrics of the song have always been open to different interpretation as well so that adds something that is also subliminal.

There is more about the collaboration here.