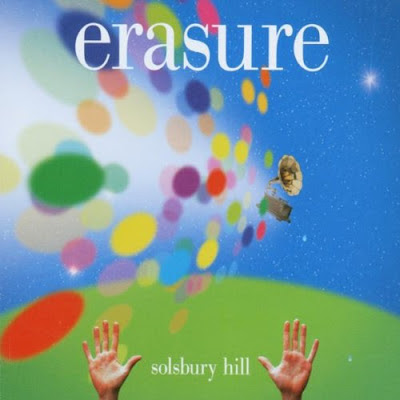 Solsbury Hill by Peter Gabriel is 35 years old this year. It got to number 13 in 1977 in the UK singles chart. Ever since I was a child I've loved that song. In 2003 Erasure released their version of Solsbury Hill and it got to number 10 in the UK singles charts. It was taken from their album Other People's Songs which featured their cover versions of songs such as Everybody's Got To Learn Sometime by The Korgis, True Love Ways by Buddy Holly and Come Up and See Me (Make Me Smile) by Steve Harley and Cockney Rebel.

Erasure have covered several songs over the years and every cover is also their own wonderful sound. I think that sense of joy was part of made their number one Abba-Esque covers EP such a huge success in 1992. That sense of happiness that quality pop music conveys is there in their version of Solsbury Hill. I think I could listen to Andy Bell sing a version of any song.

Today is Pride day here in Dublin and on days like today I always think of  out and proud popstars such as Andy who have provided the soundtrack to all our own histories through pop music. One of the most happiest concerts I have ever been at in Dublin was seeing Erasure at the Olympia in June of 2011. I had waited a long time to see Andy and Vince in concert and it was a truly joyous gig. What was also lovely is that the Olympia was also the same venue that Vince had played with Alison Moyet when Yazoo played there on their reunion tour in 2008.

Here is a live Top of the Pops performance of Solsbury Hill by Erasure.