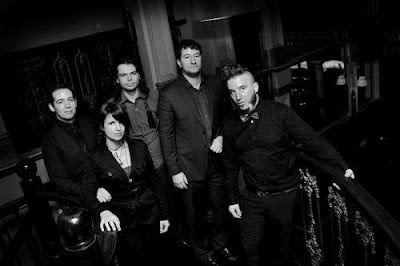 The first Kate Bush songs that I remember from my childhood were not Wuthering Heights and Wow but are Babooshka and Army Dreamers. I always remember that both of those songs almost frightened me a little bit, I always associate them with autumn or winter evenings; those Sundays when you had nothing to do with the radio playing in the background. I loved the whole world that Kate Bush created and still does with her songs. I remember Babooshka and Army Dreamers making me aware of how atmosphere and presence could be conveyed through music.  Each of  Kate Bush's singles are more than just songs; they are like favourite books that you keep and treasure. Both Babooshka and Army Dreamers featured on Kate's album Never for Ever which was released in 1980 and was the first album by a British female music artist to go to number one in the  UK album charts.

Here is a cover of Babooshka that I have loved as soon as I heard it. It is by Jaime Nanci & The Blue Boys. They are a four piece Dublin based ensemble who comprise of Jaime on vocals, Pawel Grudzien on piano, Dave Redmond on bass and Abel Benito on drums and are sometimes accompanied by Judith Font on piano and Barry Donohue on bass.

There are links to other songs such as Cry Me A River and Beautiful Feelin' on their website which can be found here.

If you live in Dublin Jaime Nanci & the Blue Boys begin a Sunday residency between 5pm and 8pm in the Sin é music venue on Ormond Quay from July 8th. More information on their facebook page here.

Here is a live in concert performance of Babooshka by Jaime Nanci & The Blue Boys which was recorded in Whelans music venue also here in Dublin in April 2011.