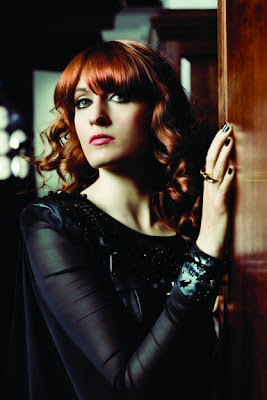 Earlier this year I went to see Florence & The Machine in concert in the 02 here in Dublin with my sister Jane. There is always something great about seeing a music artist right in the middle of their big success. They have two or three full tours done and everything that they do from then on will contain just a selection of the songs from the albums that made them famous. Florence and the Machine are like a band who know how stadium and festival songs work. I think bands like  them and also Coldplay and Black Eyed Peas write and produce songs thinking ahead of thousands of people being part of the song.
Almost every Florence song is a big song. When I saw them in concert in Dublin I remember thinking that she had sang certain songs already but she hadn't, it was just the structure and sound of the songs were the same.

Florence is very like Adele in that she loves pop. It is obvious that pop and rock are her influences, that she constantly listens to both older songs and ones in the chart right now. Any Youtube search will easily find you Florence covering songs by Rihanna, Ne-Yo, Madonna, En Vogue and more.

Here is Florence and the Machine and their live in concert cover of a very big song. The Chain by Fleetwood Mac is one of those songs that not only does Florence have to sing well but the band equally have to be at least on the level of the original. When you hear very famous songs being covered you can't help but think of the original but they do a really great version. I love the idea that some of her younger music fans may have bought and discovered Fleetwood Mac's album Rumors after hearing it. it is one of those albums that you have to listen to in one sitting.

Here is Florence and the Machine and their cover version of The Chain which was performed at Glastonbury in 2010.