'A Nightmare On Elm Street 2: Freddy's Revenge' recut as a Teen Drama 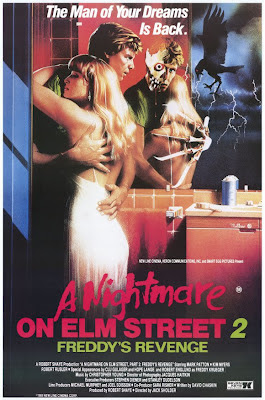 One of the first horror movies that I saw in the cinema was A Nightmare on Elm Street 2: Freddy's Revenge. It featured a male protagonist called Jesse was who played by Mark Patton. The opening scene featuring the yellow school bus been driven by Freddy is still one of my favourite horror cinema scenes. I knew watching the movie back in the cinema in the mid 1980s that there was a definite sub theme running through the film. I remember that the then 16 year old me was identifying more with Jesse than I thought I would! The other horror film that had a similar theme was the original Fright Night.

Here is a very clever recut by Johnny Jumpcut of the trailer for A Nightmare on Elm Street 2: Freddy's Revenge which edits the film as a teen drama in the guise of a Nicholas Sparks novel. I wish The Vow or The Lucky One had been half as entertaining! The recut brilliantly focuses completely on Jesse's own inner emotional torment with only a spilt second appearance by Freddy featured.

and here's the original trailer.