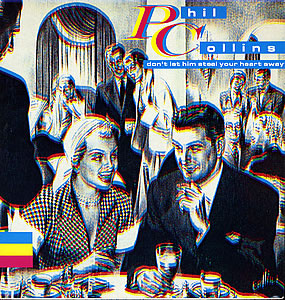 One of the most successful music artists of the 1980s was Phil Collins. He had so many hit singles both as a solo artist and with his band Genesis. I always thought that all of his singles were big hit singles but that wasn't always the case. He had a number one single with his cover of You Can't hurry Love in 1982 which was the only big UK hit from his Hello, I must Be Going album. The fourth single from that album was Don't Let Him Steal Your Heart Away which only got to number 45 in the UK in 1983 but which was a number 18 chart hit here in Ireland. I often say it on this blog but I love the fact that many songs had their highest worldwide chart position in Ireland. The single cover may look a bit strange and that's because it was a 3D cover. Before Avatar there was Phil Collins!