I Was Dreaming like a Texan Girl: The Sophie Muller Videos for Eurythmics Savage Video Album 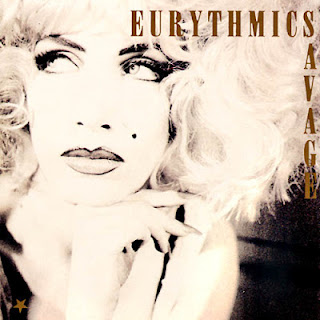 In the history of pop music two of the all time most creative music artists have to be Dave A. Stewart and Annie Lennox of Eurythmics. Each of their album releases was an event and artistic expression. Throughout the 1980s especially when the video image was all important Eurythmics made their legacy in pop music an artform.

In 1987 Eurythmics released their album Savage which is said to be their own personal favourite of all of their albums throughout their long music career. There were four singles released from the album. My own favourite single is You Have Placed a Chill in my Heart.
Every song on the album also had it's own video made for it. All of those videos were directed by Sophie Muller. Since 1987 Sophie Muller has directed many music videos for a wide variety of music artists including Stay by Shakespeare's Sister, all of the videos for Annie Lennox's Diva album, Don't Speak by No Doubt and Not Ready to Make Nice by the Dixie Chicks. Her most recent work in 2011 includes videos by Cheryl Cole, Birdy and Noah and the Whale.

Both Annie and Dave have Twitter pages. Annie's is @AnnieLennox and Dave's is @DaveStewart There is also a fantastic Ultimate Eurythmics page at @eurythmicsultim

Here are some of the videos for the Savage album which were all directed by Sophie Muller. I've selected both single releases and album tracks. Each of the videos features Annie playing a character with various personalities.

The second is You Have Placed a Chill in my Heart

The third is I Got A Lover (Back in Japan)

The fourth is Do You Want to Break Up

and the fifth is my favourite video; Beethoven (I love to Listen to)