Does He Love You 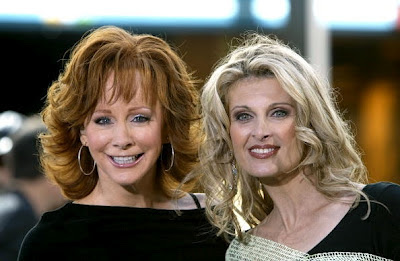 Pop music has had many great female duets over the years. Some of the ones I like the most include No More Tears (Enough is Enough) by Donna Summer & Barbra Streisand, The Boy is Mine by Brandy & Monica and Same Script, Different Cast by Whitney Houston & Deborah Cox. After pop my most favourite genre of music  is country. I know it's because when I was growing up in the 70s and 80s in Kilkenny several of the shows on the local radio station were country music.

One very fabulous duet by two female country singers is Does He Love You by Reba McEntire & Linda Davis. The duet featured on Reba's 1993 Greatest Hits Volume 2 album and won a Grammy for Best Country Vocal Collaboration. The video is fabulous in a daytime soap kind of way, it has a great ending too, very tongue in cheek!

Does He Love You has been covered a few times over the years. Two other versions that I want to feature are the duet by Donna Summer and Liza Minnelli which features on Liza's 1996 Gently album which i also think is one of her best albums. The other version is more recent and is by Martina McBride and Kelly Clarkson which is also just as fantastic. It featured in a televised tribute to Reba which is introduced by James Denton who you may recognise from Desperate Housewives.

Here are the three versions.

The first is the original version by Reba McEntire & Linda Davis.

the second is by Donna Summer & Liza Minnelli

and the third version is by Martina McBride and Kelly Clarkson.