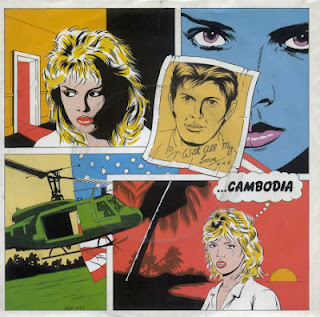 In 1981 Kim Wilde released her self titled debut album which included the three hit singles Kids in America, Chequered Love and Water on Glass. At the end of the same year she released a brand new song called Cambodia. It was the first single from her second album 1982 album Select. Cambodia was written by her father Marty Wilde and her brother Ricky Wilde and was also produced by Ricky.

Cambodia was one of the first songs that I remember hearing on the radio. I always remember that I had an awareness of the atmosphere of the song. It had a storyline about a pilot who goes missing on a routine flight in Vietnam. The storyline is told from his wife's point of view but it keeps coming back to him as well. A mood is created but it is also ambiguous. You are left in the same mind-frame as the character of the wife in that you don't know exactly what happened to him. I love this song because it evokes memory. It is the aspect of first hearing a song then in the early 1980s and then each time you  hear it since it makes you stop and just listen. I think you can't listen to Cambodia without having a story or images in your head and the skill of capturing that in a short pop song is really something. Marty and Ricky Wilde knew how to craft a song. Kim's voice drew out the emotion in the lyrics that made the story and characters real.

The 1970s had seen darker lyrics in Punk and in the 1980s the rise of Indie music continued this but in the lyrics and music of Marty and Ricky Wilde it was proven that stories with real life themes could be established within the narrative and sound of a pop song. The two songs that were released after Cambodia were View From A Bridge and Child Come Away which are also story songs and just as powerful as Cambodia.

Kim's newest album Snapshots was released in 2011 and it features several cover versions of songs old and new and I am going to do a post on that separately as there are many songs on it that I love including her version of To France. For now I just want to celebrate Cambodia.

Cambodia got to number twelve in the UK singles chart and was number one in Denmark, France, Sweden and Switerland and #2 in Germany. The album contained a longer version which includes a reprise. Here are both versions.

First the single version and it's video.

and the longer version from her Select album.