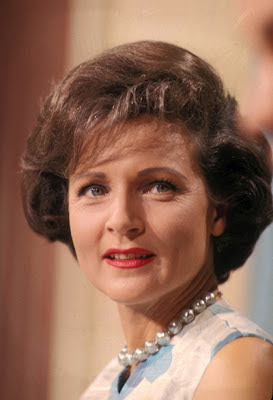 Betty White celebrated her 90th birthday this year. She is also one of the newest celebrities on Twitter which doesn't surprise any of her fans because she is the perfect example of someone who embraces all the various changes and trends in popular culture and simply enjoys them. She is an actress whom we almost feel we know personally through her personality and good character. Television comedy is part of what keeps us all going. I have had many a down day made better by being made to laugh at something I have seen on a TV comedy show. In the 1980s I adored The Golden Girls and it is a show that will always make me laugh. When you're a child you don't really get half the humour but you know you love the characters and their lives. They are made real for us and you believe in them. Re-watching the shows as adults we get all the jokes and we love that shared connection that nostalgia gives us. 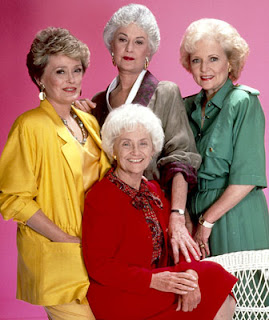 Estelle Getty, Bea Arthur, Rue McClanahan and Betty White made so many story-lines work so well because of how they worked together as a comedy team. For all of the comedy moments on The Golden Girls various seasons there were also many great episodes where more poignant dramatic themes were explored and handled so skilfully by the show's directors, writers and of course the four lead actresses. My all time favourite episode is called Isn't It Romantic which featured Lois Nettleton as a bereaved friend of Dorothy's who develops a crush on Rose. It featured in season two in 1986 and the episode was so brilliantly and beautifully done.

Here is one of the most memorable scenes from that episode.

Here is Betty White talking about The Golden Girls. She talks about reading for the part of Blanche. Rue  McClanahan sits beside her and well just look at her face as Betty talks.

Here is an 1986 interview that Barbara Walters did with Betty at the height of The Golden Girls success on TV. The interview features several clips from her most famous television work such as The Mary Tyler Moore Show. Betty also speaks about her marriage and the loss of her husband Allen Ludden.  Thank you to @videoarcheology for posting it to Youtube

and I had to post a montage of some of the many classic moments from The Golden Girls which includes moments from all four of those wonderful women.