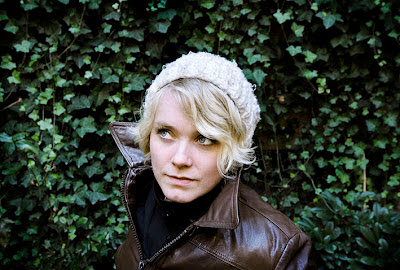 Last night I went to see Ane Brun in concert in Dublin's Vicar street music venue. I had seen her play in Whelan's in 2011 and her Dublin concert was one of the first dates in her latest tour which began in Stockholm recently. Ane Brun has become one of my most favourite female vocalists in a short space of time. There was a different atmosphere in Vicar Street as at her Whelan's gig the tiny stage was completely full with the many musical instruments of her band and the venue was completely packed out. In Vicar Street her concert was fully seated so it was a different space., at times it reminded me of seeing a play that was a concert in its entirety. Each song was a little event in itself. The band had two drum sets, a keyboard, xylophone and various guitars, many of which Ane played herself. A material background on the stage captured the lighting all through the evening and strings of lightblubs and a few small floodlights faced the crowd creating a video atmosphere at times.
Linnea Olsson was her support artist who I would go see in concert if she played a solo concert.  She played her cello with recorded backing music, I would love to see play her own songs with a full band some day. She performed several songs from her Ah album and a very unique cover of Sex Object by Kraftwerk.
Vicar Street was a perfect venue for Ane Brun. The sound was the best I have heard there in a long time so the mix of her dramatic and more delicate songs was well balanced. I had only heard songs like The Puzzle, This Voice and To Let Myself Go for the first time at her 2011 concert in Whelans and they sounded even better on this tour. Her newest album It All Starts With One is very strong and has several standout songs such as Worship, Do You Remember and These Days all of which sounded wonderful live in concert.
One of the sweetest moments during the concert was when she sang Do You Remember which is perhaps one of her most danceable songs and one by one people stood up out of the audience and started to dance. I realised that many Irish music fans are still a bit inhibited when it comes to dancing at a seated concert but it was a song that people simply reacted too. James Vincent McMorrow was a surprise guest vocalist and it was really something to see these two music artists on stage together.

Ane has so many beautiful songs, many of which that she admits are about 'different kinds of love'.  Here is just one which she sung near the end of the concert. It is from her current album It All Starts With One.