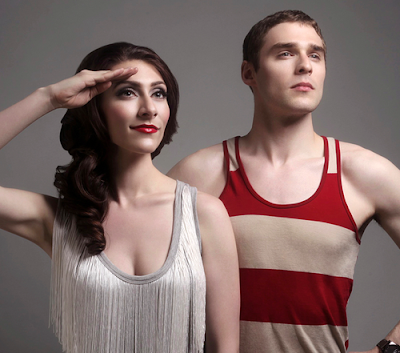 As bloggers such as Chart Rigger have been noting today the Billboard Hot 100 singles chart have never been poppier or more international. Most of the top ten have been hits already or currently her in Ireland and in the UK. I'm always interested in those songs further down the chart. Even though I am almost as old as Yoda nowadays I still will only like a song in the first few seconds when I first hear it. I gave up on the newest Marcus Collins single  after 10 seconds. One song I liked straight away is Brokenhearted by pop duo Karmin who are Amy Heidemann and Nick Noonan. It was priced at just 69c for the whole of March in the U.S. which was a v clever marketing move. They sang it on Saturday Night Live a few weeks ago too.

In the 70's my mother owned a grocery shop called Karmin Stores so I of course like their name. To date Karmin have mainly been performing cover versions of songs like Fireworks, Grenade and Jar of Hearts. Lots of those covers feature on Last.FM if you fancy a listen. I'm sure Karmin are singing Call Me Maybe somewhere in America right now.

Both Amy and Nick look like popstars which is always important. I like her hair and his vest which is always important too. Amy goes a little bit too Nicki Minaj in some of their covers and the 'cheerio' in Brokenhearted but there is no need as they are perfectly pop by themselves. I would leave the covers to Glee and do their own thing as much as possible. Karmin's new album is called  Hello which will feature many new original songs is released in May. Their Twitter is @Karmincovers

Here's their newest single Brokenhearted which is currently number 33 on the Billboard Hot 100 singles chart which is up 19 places from the previous week.