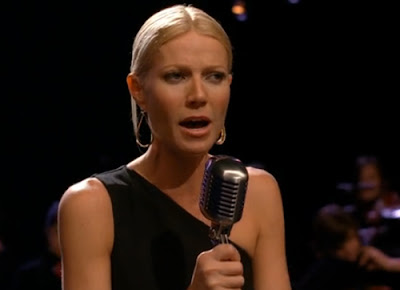 I have never watched a full episode of Glee. I find a lot of the characters annoying, I hate most of the song and dance routines, I dislike the way that Glee covers have dominated the lower half of the UK charts and that most pop songs seem to get the Glee makeover. I look forward to seeing songs that are completely not suitable for them to cover. I hate the way that almost ever Gaga single will be covered on the show from now on. Recently there was a gag about mixing up the term lesbian and Lebanese but that was blatantly ripped off from a classic Golden Girls TV moment decades ago.
I know that Glee has a v positive message in general but I am often uncomfortable with it's 'ok to be different' themes. I think if I was a gay teenager I would have some issues with the show than feeling completely positive about how gay issues are depicted. I hope in popular culture that we move beyond labeling people as different even if it is meant for the best. I am completely judging Glee from watching bits of episodes and if I followed it's narrative from the first show I may have a different opinion but I think I often am more interested in people who don't think that ever aspect of shows like Glee is perfect.

There have been moments that I have enjoyed and one was Gwyneth Paltrow singing Turning Tables. I didn't realize that it was Adele's song so I just heard Gwyneth singing this beautiful song and it was later that I listened to the original Adele version. I think of both versions when i hear that song, the cover was gorgeous but ultimately it is Adele's song and always will be. I also loved Gwyneth's songs on the Country Strong soundtrack but I think she is one of those celebrities that the general public could regard as doing too much; she's a movie and television actress, a singer of pop and  country, has her own website and now also has a cookbook. I think that even in this celebrity culture we still regard an actress as just that unless she's a mega-star like Barbra Streisand. In a way, no matter how famous someone is they are labelled too.

Here's both versions of Turning Tables.