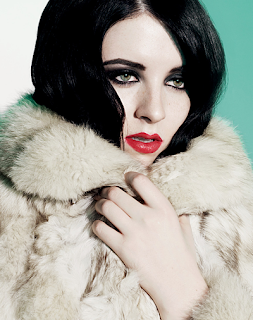 Clare Maguire played her first solo concert here in Dublin's Sugar club recently. It's a tiny venue with rows of seats and tables like you would see in a comedy club or cocktail bar. My former work colleagues Rike and Fran had played in the same venue last year so it was nice to be back there. Clare Maguire's debut album Light After Dark  is one of the strongest new albums that I've heard in a good while, well that and Hurts debut album. When Clare Maguire last performed in Dublin she supported Hurts in an equally small venue. They are both in my opinion new music artists who deserve to do much better in the charts than they are doing so far. I think the reason that their singles aren't going top ten is because they fall somewhere in the middle, perhaps viewed as too young for some music fans and too old a sound for the younger music fans. The audience on the night were 20's and much older than me.  There is a real mix of songs on Light After Dark and her vocal sounds different on more than one song especially when heard in concert. The album is full of potential singles. The Shield and  The Sword is her newest single which she sang second on the night.

Her first song in the concert was the single Ain't Nobody and an artist who performs her singles right away definitely has confidence in the album as a whole. Even though she gave every song her all the song that stood out for me on the night the most was This Is Not The End which she dedicated to her grandparents who were Irish. When an artist dedicates a song in a very heartfelt manner and tells the audience what a country  means to them, in this case Ireland, it can go well or dreadful but in this case there was almost complete silence when she sang the song which was v impressive in an Irish bar atmosphere. It was actually one of the best performances of an individual song I've heard in my many years of concert going. She went a bit mental  during the last few songs, flying around the audience, running into the narrow rows, dragging people up to dance until there were dozens of people on the stage. The Facebook generation were out in full force. She signed autographs and posed for pictures on phones for a good hour afterwards. I so want her to be a big star but the point where she will have to have some distance between herself and the audience will have to come at some point. For now she's loving every  bit of stardom that she has been bestowed with.
Strike Curious Poses Chart 11-4-2011

The first is This Is Not The End


and her new single Shield and Sword