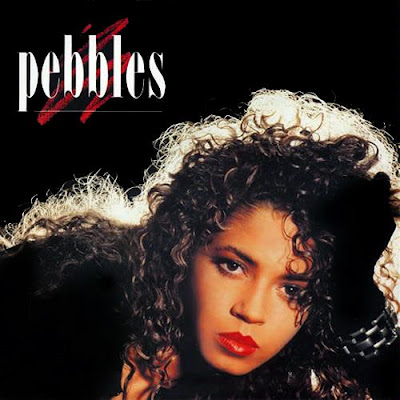 Several times when I post an old song that I love I often wish that the people who read my blog now could have been able to listen to my radio show back in the mid 1980s here in Ireland. Many of the albums that I bought on CD over the years are ones I had on vinyl back in the 1980s. One album that I played many songs from on my show was Pebbles self titled album. It featured Girlfriend her most famous song which got to number 5 in the US and number 8 in the UK. I love that song but that isn't my favourite. The follow up single Mercedes Boy is. It got to number 2 in the Billboard Hot 100 charts in 1988 making it her biggest hit ever. I think it is a perfect R'n'B pop song. I thought Pebbles was so gorgeous. She had perfect attitude, no nonsense, sheer fabulous. The other songs that I liked on the album the most were Slip Away and Baby Love. Do Me Right and Take Your Time were also singles from her first album. Check them out if you can. Pebbles also had a great single in 1990 called Giving You The Benefit. Janet Jackson was the queen of that type of R'n'B pop back then but you can see a lot of an artist like Pebbles in other groups like Destiny's Child in the later 2 decades. Pebbles is now Perri Nixon. She went on to create TLC, marry and separate from the music producer L.A. Reid and become a Christian minister called Sister Perri. Lots more about her here. Mercedes Boy is now 21 years old. Like all my favourite songs I will never grow tired of hearing it. Here's the album version which is almost 5 minutes long. It includes the car starting up intro and a great male backing vocal later on.
Posted by Unknown at 1:47 PM

I have lost a little bit of my love for Pebbles since the whole TLC debacle, but "Giving You the Benefit" was the jam back in the day. Remember "Backyard" with Salt N Pepa?

I love this song most of all from Pebbles. And, shockingly, I do not have it on my iPod... thanks for bringing this to my attention, David. :)