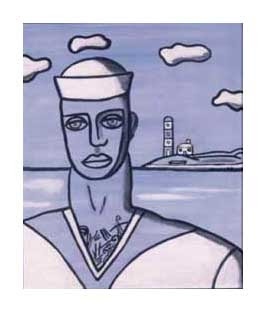 This week 25 years ago, in January 1984, Paul McCartney was number one with Pipes Of Peace. Paul was also number one in the USA Billboard Hot 100 charts with Michael Jackson with Say, Say, Say which I liked a lot. Pipes of Peace was number one for two weeks in January in 1984. The song that was to be the second number one of that year was by Frankie Goes To Hollywood. That song was Relax and it became one of the most controversial or at least talked about songs of the 1980's. Relax had been on release since October of 1983 and charted at number 67 in November. It would be the 24th of January that Relax went to number one where it stayed for 5 weeks until Nena and her 99 Red Balloons replaced it at the top of the charts. Relax only become "controversial" when the DJ Mike Read proclaimed his distaste of the song, especially the singles record cover and it was then that the BBC decided to ban the song. However DJs like John Peel, who had always supported the band, continued to play Relax on other BBC night time radio shows. Here's the "offending" record cover. It's still pure, wonderful art to me. 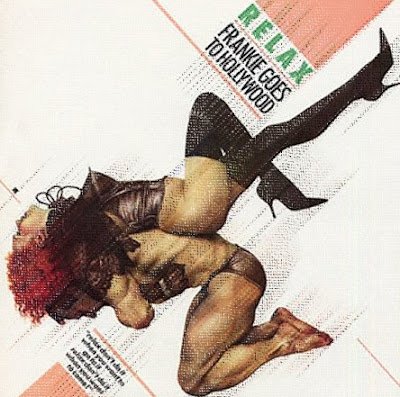 I never really liked Relax when it was first released. However, I do think it has stood the test of time. It still gets you. I liked Two Tribes more and The Power Of Love is still one of my favourite songs especially the lyrics; "I'll protect you from the hooded claw, keep the vampires from your door". Frankie's debut album Welcome to the Pleasuredome was something I forever associate the now no-more shop Woolworths with. I can still remember seeing the album below in it's record racks. Welcome to the Pleasuredome was a double disc album in a gatefold sleeve, which was just gorgeous. The singles are the album's most famous songs and after The Power of Love it was the title track that I most liked. Stand outs were also the cover versions of War and Born to Run. Frankie covering Springsteen, who in 1984 was the ultimate image of all American male, was just pop heaven. 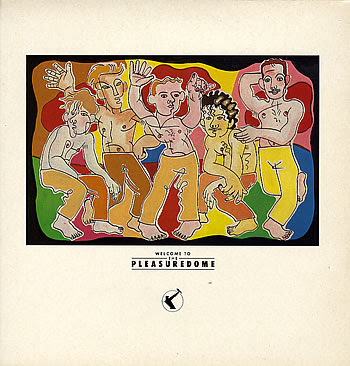 Back then, I was only 14 and I'm sure that Frankie's Holly Johnson and Paul Rutherford were out and proud and like Boy George, they said whatever they wanted in the media. It was always Frankie Vs Wham! or Duran Duran in "Smash Hits!" then. Frankie was like a slightly darker, political (anti Thatcher) pop but they were brilliant, always. I remember wishing I fancied Holly or Paul but I know I found them a bit scary. It was Mark O'Toole I liked (fancied) the most. He's the second last in the photo below. I think when your growing up someone in a band, especially a straight guy becomes your type and back in 1984 mine had begun. Brian Nash and Peter Gill were the other two members of the band. I loved the fact that two gay men and three straight men could all be part of a great pop band and have fun with it all. I loved the fact that they both didn't give a fuck and the same time very much did. One track on the album was "Wish the Lads Were Here" and you just believed them meaning it. Frankie were both real; the everyday man and also were the unreal; great popstars, whom Irish starstruck teenagers like me, just saw on TV shows like "The Tube" or "Top Of The Pops". 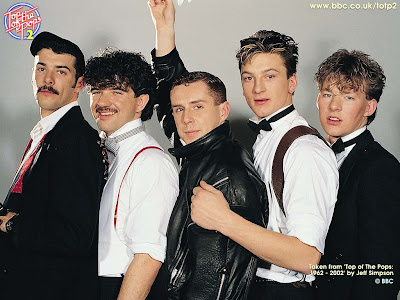 Holly Johnson was a fairly successful solo pop star for a few years after Frankie Goes To Hollywood came to an end. His website is here. It features lots about Holly, both Frankie and solo work and also highlights his art such as the painting of the sailor at the top of this article and the one below. 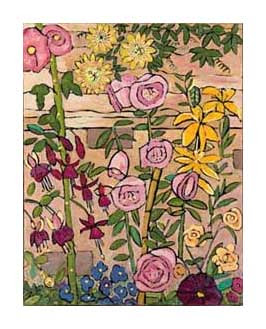 Frankie reunited for a while in 2004 though without Brian Nash. Brian has a website here. Paul Rutherford, like Holly, went solo for a while and released an album of which two songs were produced by ABC. According to the Holy Bible that is Wikipedia, Paul now lives in New Zealand with his long term partner. Peter Gill formed another band called Ltd Noise in 2001. Mark O'Toole now lives in Florida with his family. He's in a band called Trapped By Mormons and their website is here. What is interesting is that "Relax" was actually the first song on the first "Top Of The Pops" of 1984. The show was also was the 20th anniversary show of "Top Of The Pops". This was on the 5th of January. Just 6 days later on the 11th, Mike Read would create pop history by having a little baby on air over the song's record sleeve and lyrics and shortly after the BBC would ban a song they had used to begin "Top Of The Pops" year with. That ban ironically would make the band famous far quicker than they had ever hoped possible. Here's that performance of "Relax" from January 5th 1984 when it had that week charted at number 35. As John Peel introduces them he says "This is very 1984 though, this, Frankie Goes To Hollywood".

I got into Frankie years after they were popular and really still adore their first album. I remember my mom telling me that Relax was about needing to go to the toilet desperately!!!!!