Why Does It Hurt When My Heart Misses The Beat (and other re-discovered classic lyrics on vinyl). 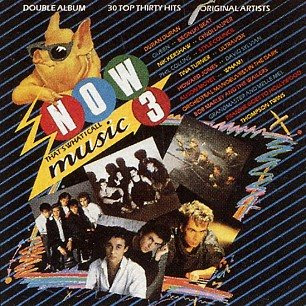 It's my birthday tomorrow. 39! Each year, present wise I usually get money. Which is always very fine indeed. Today, after spending a lovely day with my parents, they gave me a wrapped up present. A record player, one with CD and MP3 malarkey as well. It was around 1990 when I last played any of my vinyl records. How different and gorgeous is the sound from a record player. It is 1984 all over again, hooray! The first song I played on my new record player was Madonna's "Holiday" from her album "Madonna" which I bought in a Co Wexford record shop a million years ago. I had to play Madonna first as my friend John Jennings would say, it would be rude not to. I have also being playing "Now That's What I Call Music 3", which I bought for my 15th birthday back in 1984, and for an album played a thousand times is still sounding wonderful. That album is pictured above. The cover is like a history of quality 80's pop. Duran Duran, Wham!, Queen, Nik Kershaw and Frankie Goes to Hollywood. There were so many perfect pop songs on that 30 track double disc album such as "White Lines (Don't Do It)" (Grandmaster and Melle Mel), "What's Love Got To Do With It" (Tina Turner), "Love Resurrection" (Alison Moyet), and "Love Wars" (Womack and Womack). The full track list is here. Here's three videos from "Now 3" with the original sleeve notes that appeared on the album. The Thompson Twins and "You Take Me Up". "Charted at No. 13 on 27th March - reached No. 2 on 17th April. From LP/Cassette "Into The Gap"." Bananarama and Robert De Niro's Waiting. "Charted at No. 48 on 28th February - reached No. 3 on 27th March for 2 weeks. From LP/Cassette "Bananarama"." Propaganda and Doctor Mabuse. "Charted at No. 64 on 13th March - reached No. 27 on 17th April."
Posted by Unknown at 12:58 PM

It's Raining Men, Thinking of You, Smalltown Boy... my god, 1984 was truly a vintage year!

I've got a zillion Now's on vinyl in the parents' attic. I'd love to uncover them once more.

Enjoy the record player (how fab are your parents!) and have a great birthday!

one of the best things about those songs is that they were all nearly originals, their first time in the charts,

I bet you have some great stuff on vinyl, I have Scritti Politti's "Cupid & Psyche 85"
as well from that period which I'm sure you have too,

Happy Birthday from one big old 80's queen to another!
I guess you'd have to skip the Gary Glitter track these days though.

Thanks David,
yes, you're right, I did lift the needle on that one, dx

Happy Belated b'day, David! Hope you had a great 39th.

1984 was a fantastical year for music. I love the Thompson Twins and Bananarama ... to hear them on vinyl would be sweet!

Happy belated Birthday!!! Sorry i'm so late :( At least next year you are allowed to start counting backwards for a few years! ho ho ;P Hope you had a lovely day!

Happy belated birthday to you! I love listening to Tina Turner, and What's Love Got to Do with It is one of them :) cheers

Oh I recently found "Now that's what I call music" the original compilation. It was on cassette though. Was great to hear all the tracks all the same. It was my sisters but I remember being allowed to hold the cassette box every now and then! Oh the glamor of it! :)