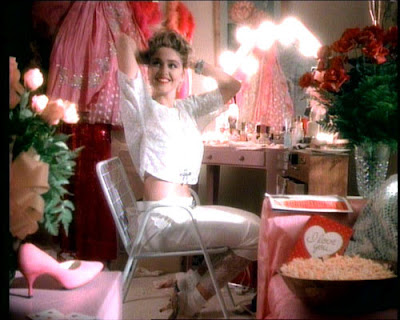 Many years ago, I think in the early 1990's, I thought that; on August 16th 2008, Madonna will be 50 years old. It seems so long ago when I had that thought and now that day is tomorrow. I think that is the great thing that unites Madonna fans all over the world is that they believed that she would be around for a long time and that every year she would do something new and iconic and unforgettable. For every little bit of praise Madonna has had since her career and stardom began in 1983, she has recieved twice as much criticism, but never from her fans. We may not like a certain image or an album track or a video or even question her motives ( and sometimes morals) but we simply always believed in her. I was going to list my favourite Madonna songs here, even list 50 of them, but for me album tracks and b-sides, right back to "Ain't no Big Deal" were just as important. Is "Live to Tell" a better song than "Oh Father"? Which remix of "Vogue" is best? Was "Causing a Commotion" more cute than "True Blue"? The common link between all these songs is that they are just so famous. There are all moments of modern popular culture. I know I feel happy every time I hear "Holiday" and "Angel". I know I am a teenager again when I look at her performance of "Dress You Up" and see that jacket. I know that the line "my sisters and me" was forever stuck in my head when I heard "Jump" for the first time and I thought of my own sisters and how fab they both are. Likewise, I think of my parents and my brother when I hear "Keep it Together". Sometimes when I hear the line "my baby's got a secret" from "Secret" I think of anyone who hasn't had the courage to come out yet. For me, Madonna has always been about the songs. I couldn't imagine never hearing "Borderline" or "Nothing Fails" or "Bad Girl" again. I found Christopher Ciccone's book on his life with her both entertaining and comical in an "National Enquirer" kind of way. The read-between-the-lines notion that she would have been nothing without him is just so tragic. Being her brother turned out be both blessing and curse in equal measure. I was going to write about that book when I had read it but I much preferred David's brilliantly written review of the book, on his David's Daily Dramas website. That review is here. Please check out David's site too, it is a treasure chest of all that is fab in popular culture, just like the blogs links, both old and new (that includes you Paul and Yuri!), I have listed on this site's blog list. I have seen Madonna twice. On stage in London in "Up for Grabs", which was like a dream but for all of that I remember I hadn't the nerve to tell the queen I was sitting beside to shut the fuck up. Nowadays I wouldn't think twice of doing so. And I saw her in Slane, here in Ireland, on her "Re-invention tour". That day I went with friends that I still know, friends I wish I still would see now and strangers whom I never met again. 14 of us travelled in a hired mini-van driven by a driver who didn't really know how to get to Slane from Dublin but who turned out to know the local guards in Slane village who signalled us on to the gate of the venue where we all got pit-passes armbands and we would be mere meters from greatness that Slane night. That concert was so good I have not been disappointed that I haven't seen her in concert since. So many Madonna moments will appear on blogs and websites everywhere in the world this weekend. The video below is quite simply one of the greatest televised performances of a song ever. In 1990 Madonna had toured the world with her "Blonde Ambition" tour. The documentary film "Truth or Dare" or "In Bed with Madonna" was being filmed. The dancers on both her tour and the original video for "Vogue" were all used again for her MTV music awards performance of "Vogue". Her Marie Antoinette inspired performance featured some of the most memorable choreography ever seen on an MTV awards show. The montage is sexy, sleazy and faultless in equal measure. Madonna's dancers especially, Donna De Lory and Niki Harris, her female backing singers and dancers, were perfect on the night. When you watch the video again, look at the hand held fans, when they are thrown into the air. All this is done live, it's truly fantastic. It is Madonna as perfectionist, as superstar.
The second video is a mash up featuring Timbaland's (and Keri Hilson's) "The Way I Are" and Madonna's "Holiday". "The Way I are" is one of the best songs of the past decade and "Holiday" is a song that I will never tire of hearing. It's a great example of how Madonna's songs work perfectly within mash ups, there are several other mash ups on ddjmilk's Youtube page. How cute did she look in that outfit too, also from the "Blonde Ambition" tour.
Happy Birthday, Madonna, and thank you.
Posted by Unknown at 12:27 PM

Yup, Madge is a funny one, but even though I wouldn't say I'm a huge fan, yet she's no 5 on my most listened to artists on last.fm - what does that mean? :)

So many great tracks though and many associated with some of those epiphanies: 'You'll See' when I was fucked off with bullies in college, 'Justify My Love' when feeling newly-militant and polysexual, 'Vogue' when joyous on the dancefloor, 'Ray of Light' when maturing a bit, but not enough to stop dancing, 'Bedtime Story' when that commercial/weird hybrid was attractive, etc etc.

I keep coming back to no particular track, but 'Borderline' stands out for some reason - danceable, catchy, smart - what all good pop should aspire to.

All great songs you highlighted there Enda. "Borderline" is such a gorgeous pop song. The array of songs really show that every album had a song or two that defined the time it was released in.
Always love to hear your opinion so thanks for that,
dx.

Thanks for the shout-out, David. Hope you had a great Madonna B'day. She has so many great tracks, past and present, many of which are quite mash-upable. :) I'm heading to Chicago to see her in October and can't wait. The last time I saw her live was in 1990 at Blond Ambition.

Hi Yuri,
lucky you to have seen her in her blonde ambition days, that is the tour I wish i had seen the most,
will be looking forward to your review in October too, D.