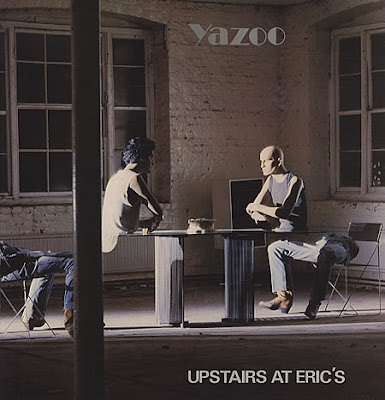 In 1982 I was 12 years old. The year is important music wise to me because it was the year that I first remember loving a pop song. The song was "Only You" by Yazoo. I would get to see Alison Moyet sing the song in Dublin's Olympia theatre many years later in the 1990's but I never thought I would get to see her perform it as part of the group Yazoo. On Monday night I did as Yazoo played the same venue as part of their "Yazoo: Reconnected tour".
It was a truly great concert experience. The stage was like a Top of the Pops set with strobe lighting, neon lit flooring, visuals on screens, one behind Alison and Vince. She was in great form throughout, genuinely loving the adoration of the Dublin crowd, a great big smile across her face throughout the gig. Vince Clarke however was at best robotic but it all helped to Tardis the audience back to TV screens showing Top of the Pops or The Tube.
Beginning with "Nobody's Diary", one of the all time great pop songs, the concert featured many songs from Yazoo's two albums. "Upstairs at Eric's" from 1982 and 1983's "You and me Both". The "hits", "Situation", "Don't Go" and of course "Only You" were saved for near the end but if you going to see them I would advise listening to the two albums again. It is truly wonderful to hear songs like "Midnight" "State Farm" and "In My room" sung live. "Tuesday" is a really tender song which you could imagine a singer like Annie Lennox singing now or back when the Eurythmics were also new artists in the charts with Yazoo.
Vince's synth is now replaced by a laptop but the sound was great throughout. There was no band just the two of them so that added to the whole experience. Vince is now most known for being one half of Erasure but he was also the man who wrote "Just Can't Get Enough" while he was an original member of Depeche Mode. He also wrote the much better song, "New Life".
The audience became a happy football crowd when "Only You" was sung which Alison introduced as "a song that has been very good to Vince" and she wished that it was one that she had written. Sadly, the audience went a bit Flying Pickets while singing the song. The fact that The Flying Pickets had a 5 week Christmas number one with "Only You", while Yazoo's version only got to number two, shows that the charts have always been a mad place.
"Only You" was also offered to Depeche Mode by Vince Clarke and when they turned it down it would become Yazoo's debut single. I still can't imagine Dave Gahan singing it. "Situation" was also the b-side of "Only You" and was, amazingly, never a single in it's own right in the UK in the early 1980's, a remix of the song would get to number 14 in the UK in 1990. "Situation" also opens with one of the best "laugh" introduction which, for me, is as memorable as Madonna's laugh at the beginning of 1985's "Angel".
The two clips below feature "Don't Go". One is from the time when the song was first released and the second is from May of this year and is a live performance which Yazoo did when they guested on Jonathon Ross's chat show. Ross was and still is, obviously a fan and rightly calls them one of Britain's greatest bands.
Yazoo's tour continues for the next few weeks in the UK and there will be one date in Barcelona and in July will also play American dates in Las Vegas, Oakland in San Francisco, Dallas, Washington, New York, Los Angeles and Chicago. The website which lists all the tour dates, as well as details on the remastered editions of their albums is here.
In America in the 1980's they were know as Yaz. When I told a 20 something colleague in work that, I was going to see Yazoo in concert, he said "Didn't she sing "The Only Way is Up"?".
Not a million miles away.... I guess.