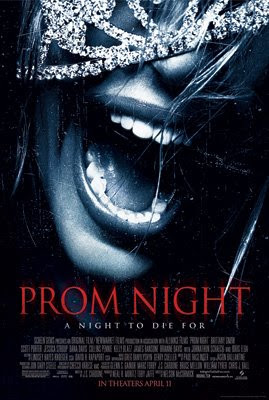 Many months ago when I read that there was going to be a new horror movie called "Prom Night" it reminded me of the 1980 film which starred Jamie Lee Curtis and was one that I was far too young to see when it was released in it's day.
The "Prom Night" of 2008 really only shares a name with the 1980 movie as the plots of both movies are quite different.
"Prom Night" (2008) is a 15a cert in Ireland which means if you are aged over 15 you can bring anyone under that age with you to see it. I am forever uncomfortable with this cert. While there is no intensely gory scenes in "Prom Night" it's theme is still adult, particularly the opening scene.
"Prom Night" (2008) begins with Donna (Brittany Snow) returning home to find her younger brother dead, unaware her father too lies murdered downstairs and after going to hide under a bed, then witnesses her mother being killed, stabbed by a manically obsessed teacher in Donna's high school, Richard Fenton (Jonathon Schaech).
A counselling session and a change of dress later and it's straight into the event of Donna's Prom Night. Her Aunt and Uncle are now her surrogate parents; who are there to tell her she's the "most beautiful girl in the world" and also frighten the life out of her as she stands in front of the bathroom mirror. Meanwhile Donna-obsessed Richard has escaped from his maximum (minimum) security prison three days previously and has arrived at the hotel that the Prom is being held in, checking in under an alias, his only disguise a baseball cap. It has also taken three days for the police in Donna's home town to be informed.
This all happens in the first five minutes of the film. From there on it is pure and utter B-movie. It is the "Showgirls" of it's day without the nudity or Elizabeth Berkley.
Donna goes to her Prom night with her perfectly handsome boyfriend Bobby (Scott Porter) and her friends Claire (Jessica Stroup) and Michael (Kelly Blatz) and Crissy (Brianne Davis) and Ronnie (Collins Pennie). The acting and script is so bad at this early part of the movie that it's like as if they met in the car park 5 minutes beforehand instead of being in High School all those years.
It is obvious by the grand entrance and upstairs suites that the hotel is a very expensive place to stay in. However! This is also a hotel where there are no security staff let alone cameras anywhere. It dosen't take Richard long to make his first kill and after the third or fourth murder, you wonder is he going to make his way through everyone in the entire hotel.
Despite the fact that the man who has murdered her entire family may (i.e., is) in the hotel with Donna, it is decided (solely) by Officer Hicks (Craig Susser) that it's best not to tell Donna this information. If ever a movie character would later have the guilt of the deaths of the young and the restless on his hands it's Officer Hicks!
There is no little or no interaction outside of Donna's immediate set of friends, so it is obvious who is on the quick exit list. As most of the murders take place in a hotel room, the movie for the first half should have simply have been called "Spider's Web".
The Prom Night party itself is a rather horrible affair. An awful mix of bad music, a name checking dj and various video montages of the students. When you consider the fact that Scott Porter who plays boyfriend Bobby is 28 in real life, these are teenagers a lá Beverly Hills 90210's Dylan and Brandon.
Brittany Snow is very pretty and does get to scream once or twice but this a Prom Night where the main character isn't even on the short-list to be named Prom Queen, Crissy has been instead. Therefore even the imagery of the tilted tiara on the movie poster, which we assume is Donna, doesn't even apply.
As the film processes the entire plot just gets more ridiculous by the second. Literally! For the majority of the film, not one student or teacher in the hotel recognises former teacher Richard as he wanders from hallway to hotel room to lift to reception area. A small child could make better plot twists here, than what happens in the last half hour of this movie.
By not having any gore there are no "Final Destination"/"The Omen" inventive style death scenes which seems to be the only way to make the teen horror movie different these days.
There is not one moment of tension in the whole thing. Jonathon Schaech is a bit unnerving in this movie but he is an actor who was once regarded by magazines like "Vanity Fair" as someone to watch out for after his roles in films like "That Thing You Do" and "How To Make an American Quilt". With the younger actors in the film, being in a horror movie is almost like something that has to be part of their acting résumé in Hollywood today.
When 2008 will be reviewed, "Prom Night" will still be one of the "number one" movies of the year as it made that position on it's release last April when it made $20 million in it's first weekend. This made back the film's entire budget in three days and it went on to gross €43 million in total in the US, which for now means that movies of it's type will continue to be greenlighted by studios in the US.
The only other movie to get truly awful reviews recently was the spoof comedy, "Superhero Movie", which stars Drake Bell and Leslie Nielsen.
In 1980, 28 years ago, Leslie Nielsen also starred in a horror movie.
That film was "Prom Night".
Posted by Unknown at 12:53 PM