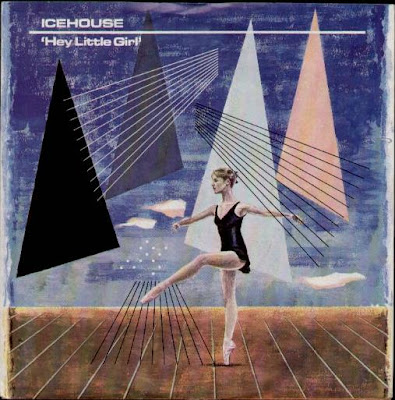 The next song on my favourite songs from the 1980's is also 25 years old this year.
In February 1983, "Hey Little Girl", by the Australian band Icehouse was released and made it to number 17 in the UK singles chart. I always thought that the song had made it at least into the top ten but like today, many of the best songs are not always top ten hits. The song fared better in the band's native Australia where it got to number 6 in the then ARIA charts, it was also a number one in Switzerland. I'm sure it is a song that many readers on this site know but for those who don't "Hey Little Girl" is one of the most atmospheric and haunting songs from that decade.
It is one of the first singles I ever bought but sadly my copy has disappeared over the years. "Hey Little Girl" was taken from Icehouse's second album "Primitive Man" which was originally recorded and released as a solo project for the band's singer Iva Davies.
Icehouse released several albums after the success of "Primitive Man". Their most successful album "Man of Colours" was released in 1987 and was a number one best seller in Australia and New Zealand. The single "Electric Blue" from that album was a big American radio hit at the time.
In 2006, Icehouse recorded a new album "Bi-Polar Poems" but, to date, it has not been released.
Icehouse also supported David Bowie on his famous "Serious Moonlight" tour and in 2003 Iva Davies collaborated with Christopher Gordon and Richard Tognetti to write the acclaimed film score for fellow Australian Peter Weir's film; "Master and Commander: The Far Side of the World".
The video for "Hey Little Girl" is below. It matches the mood of the song perfectly. To this day "Hey Little Girl"'s lyrics are one that stay in the mind.
The chorus is both simple and unnerving.